I’ve done similar blogs on trends data before, and thought it might be interesting to predict the US election based on this.

The polls are notoriously bad, as are bookmakers. Brexit shows how badly both predict results, and a lot of that is down to mainstream media portrayal of a political viewpoint. A polling company will ring up thousands of people and ask them which way they will vote. This is a dreadful way to gauge the outcome. The first point is that they roughly need to ring 20,000 people to get just 1,000 opinions. Only 5% of people will be forthcoming. And rightly so, a vote is a private and personal choice and nobody’s business but your own. They have small sample sets. The second important point is that the media will take a narrative. In the case of Brexit, if you are being told that ‘Leavers’ are low income, ill-educated, racist, uninformed and ignorant, if you intend to vote leave, are you likely to tell someone when asked, so they can make those assumptions about you?

We live in an age where mainstream media is very partisan. It takes a side and pushes very heavily in that direction. This isn’t necessarily sinister. You might argue that the BBC receives EU funding and so was pro-EU, but the cause is likely a lot more benign. There are large numbers of Liberals working for these media companies. And when they interview new candidates, who will they hire? Homophily suggests you will hire people like you. Those you connect with. Using the BBC as an example once again, they may be very diverse in culture, sexual orientation and race, but there is virtually no diversity in political opinion. Everyone is on the same page. There were no news readers or interviewers who were pro-leave. In fact, there were few comedians, actors or script writers pro-leave either.

And so, to America

The number one way that we know what is happening in the world is via the news. The only way I could even know Obama is the current president is because the news tells me this. There could be a 40ft Lizard King in Capitol hill that feeds on the poor, but I would never know. I’ve never been to Washington, I can’t interview Obama myself, I don’t know anyone who has ever met him. The news tells me he is President and it informs all the other outlets where the information also exists. The only reason I know he implemented Obama care is because the media told me. The only reason I know America is even a democracy is because media tells me.

This is very important. If we get all our info from the media and we don’t trust it, what do we vote? If CNN and Fox News tells people to vote Clinton, and they don’t trust those organisations, will they vote Clinton? I suspect this to be a far higher correlation of people’s intentions to vote. People now, seem now to prefer to get news from Social media, where an analyst will take the news and give their viewpoint, cleansing it of the mainstream’s viewpoint and adding their own.

So, let us look at the metric for people Googling “biased media”. The result is earth shattering.

You can see a huge spike in the last 3 months. There was no such anti-trust during the last election cycle. In fact, this sentiment is unprecedented in America. The media is viewed as now in bed with corporations, the government, the banks … the elite. And people are interested in that. They want to know more and crucially, Google for it. They don’t go straight to a news outlet.

If we extrapolate to look where in America people feel like this, the maps are an eye opener. You’ll notice Republican states haven’t seen such a surge in this search term. Because they already don’t agree with the media. What we see is people in Clinton’s key states all losing confidence in what they have been told. Wyoming hasn’t got the spike in that search term. It is already Republican, it will vote Trump, it isn’t looking to find out opinions on a biased media. It is the Democrat heartlands and swing states where this ‘cancer’ has set in. It is Democrat states that are haemorrhaging media trust. Trump’s message is resonating. 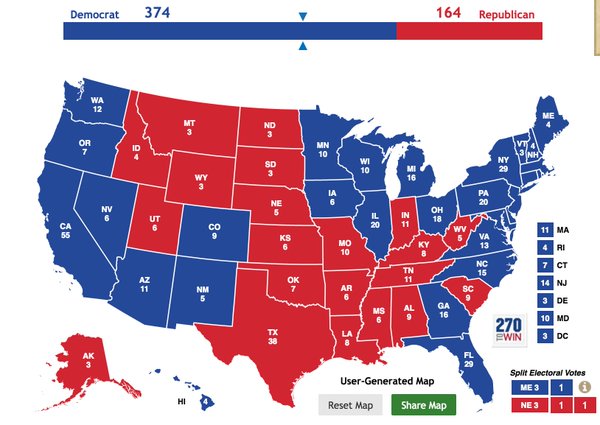 If you needed any further convincing, look at the number one search term correlated with this “biased media” search request. By a long way … “Trump”. Those same people googling anti-trust are going on to google “Trump” the same day. The volumes follow and map each other more closely than any other term.

Google would suggest Trump is going to win, and he is going to do it comfortably. And the pollsters, the bookies and the media are going to be absolutely blindsided again, exactly as it was with Brexit.